Two of the biggest problems that people face as their skin ages is dehydration and loose, sagging skin.

From sun exposure to a natural decline in collagen production to thinning skin, there are so many different factors that contribute to these skin changes, often making it feel as though you’re fighting a losing battle.

However, this only means that you aren’t using the right ingredients yet…

There are several ingredients out there that can help with dehydration, dryness, and loose skin, but today the focus is going to be on plant oils.

Because not only do they help to maintain skin hydration levels, but the antioxidants and nutrients they contain can really turn back the clock on many of the visible signs of skin aging.

Each plant oil out there has its own unique benefits. When it comes to tightening and rehydrating your skin, these are the six oils you want to be using. 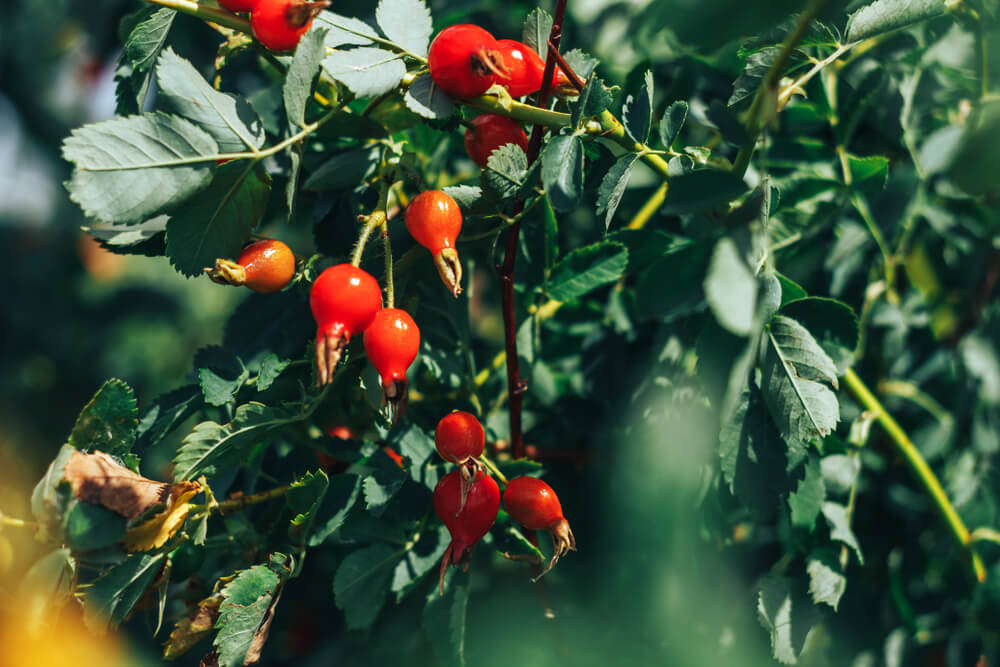 Just about every dermatologist out there would agree that rosehip oil is one of the best plant oils for aging skin.

The oil comes from the fruit produced by roses once the petals have died back, giving it a very different chemical composition to rose flower oil.

One of the biggest differences is that rosehip seed oil is packed with important essential fatty acids. These help to strengthen and support the walls of your skin cells, preventing them from losing moisture.

When it comes to wrinkles and loose skin, rosehip seed oil comes out on top yet again…

Rosehips contain about 40 times more vitamin C than oranges, and vitamin C is a key player when it comes to tightening the skin. It’s a major part of collagen production, which is the protein that holds your skin up from within, giving it its structure and firmness.

Your skin naturally produces collagen, but this declines with age, making it important to supplement your skin care with ingredients capable of boosting this back up again.

In addition to vitamin C, vitamin A is another necessary nutrient for collagen production, and rosehips contain plenty of this too.

Research has found that rosehip seed oil is able to increase hydration and elasticity, making it a must for those seeking younger-looking skin.

To really get the most out of rosehip seed oil, you need to incorporate it into various stages of your skin care routine. One way to do this is with the OROGOLD 24K Rose Gold Collection. It contains a serum, a face mask, two moisturizers, and a concentrated anti-wrinkle solution, all of which have been infused with the powerful properties of rosehip. 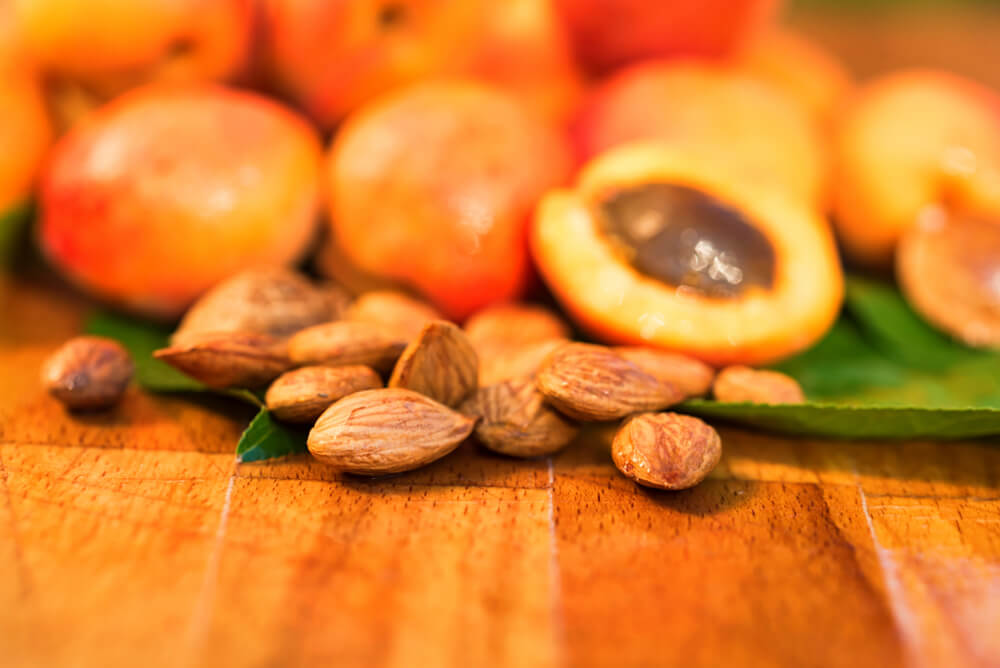 Apricot kernel oil isn’t as commonly used in skin care as other plant oils, but it’s one that you need to know about if you’re looking into anti-aging skin care.

The oil comes from the seed of the apricot, which gives it quite a nutty flavor, making it a popular cooking ingredient in many countries around the world. Those same seeds are also filled with a variety of different nutrients, such as:

All of these come together to create a highly moisturizing oil that quickly soothes the skin. Its anti-inflammatory properties enable it to treat certain skin conditions, such as psoriasis and eczema, and it quickly gets to work when it comes to fine lines, wrinkles, and dark spots.

Apricot kernel oil is surprisingly similar to many plant oils when it comes to its skin benefits, with experts often comparing it to sweet almond oil. The two can be used pretty much interchangeably, with the main difference being that apricot kernel oil is suitable even for those who have nut allergies.

Since the molecular structure of apricot kernel oil closely resembles that of human sebum, the skin readily accepts it. The oil is absorbed quickly and easily, after which the skin then puts its various compounds to work.

Wondering if apricot oil will clog up your pores?

It rates a “2” on the comedogenic scale. This means that those who have overly-oily skin should avoid it, while everyone else should be able to handle it just fine! 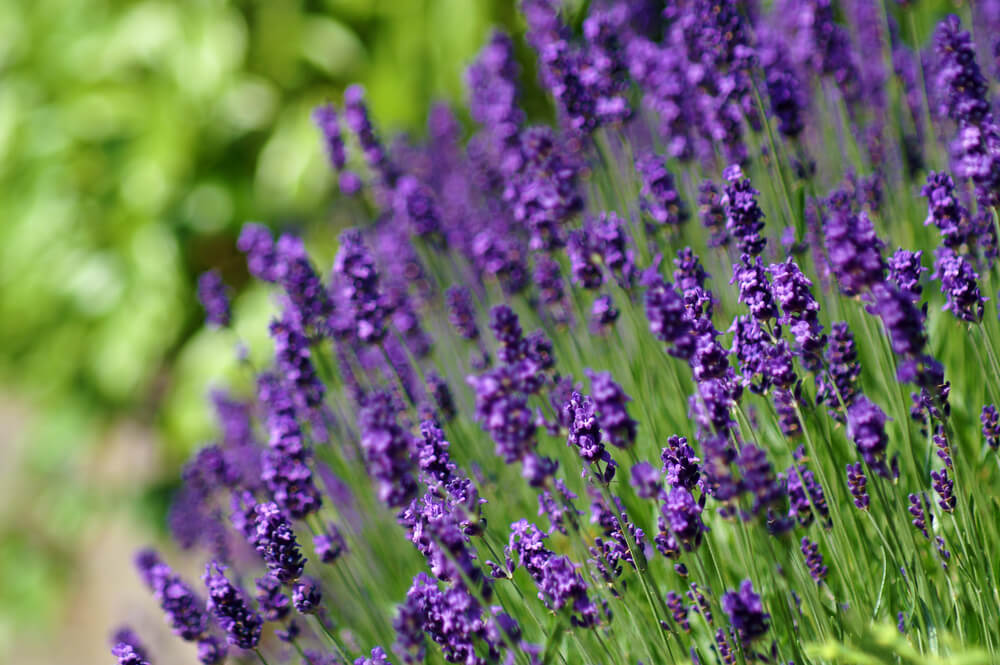 Just about everyone is familiar with the sweetly perfumed scent of lavender. With its distinct fragrance, lavender oil is found in so many different products, including skin care.

However, it’s not just its scent that makes lavender stand out…

Lavender is known for containing a huge number of different antioxidants. Not only that, but the compounds within lavender stimulate the body into producing three of its own most important antioxidants:

Why are antioxidants so important?

Because they prevent and reverse free radical damage, much of which shows up in the skin as fine lines, wrinkles, and sagging.

Dark spots are another common sign of aging skin too. While the antioxidants in lavender can help with this as well, lavender can also lighten and brighten the skin, meaning that those areas of hyperpigmentation could be gone in no time.

If all of that was not enough, lavender is also an effective anti-inflammatory, thanks to its beta-caryophyllene content. This means that lavender can soothe skin redness while helping with inflammatory skin conditions.

If you would like a fun yet effective way to add lavender into your skin care routine, try the 24K Collagen Eye Renewal Mask. Numerous hydrating extracts and compounds make an appearance in this formula, which is why it’s a popular one for reducing the appearance of fine lines and wrinkles around the eyes. 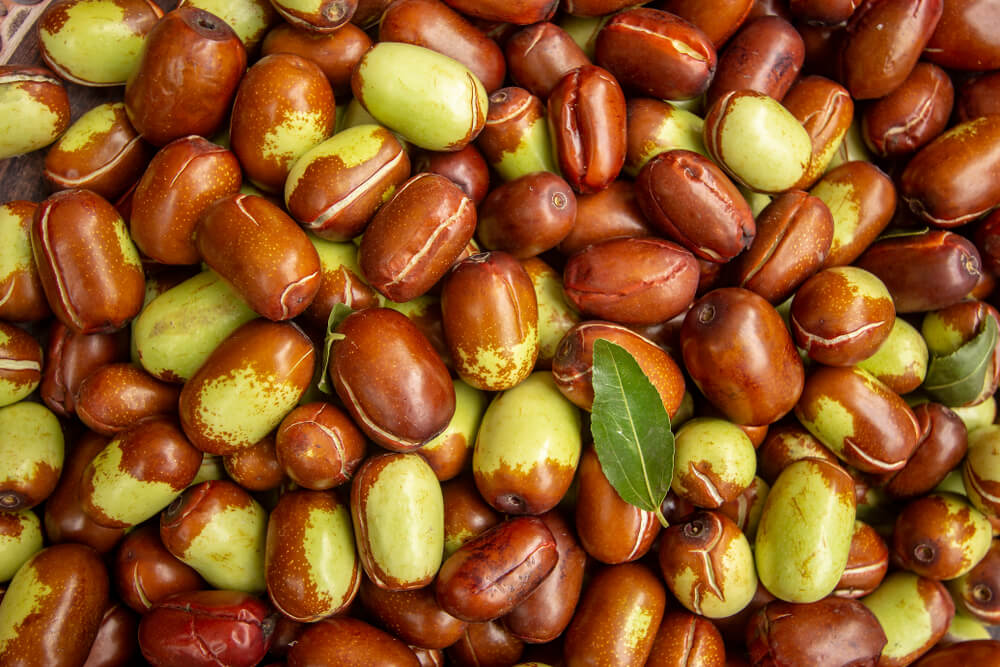 Ever heard of the jojoba plant?

It’s a shrub that comes from Mexico and the American Southwest, and its seeds are where jojoba oil comes from. Chances are that you’ve heard of jojoba oil before, since this ingredient is a superstar when it comes to skin care.

One thing that makes jojoba oil so special is its molecular makeup. All of its natural fats closely resemble the skin’s own sebum, meaning that the two can seamlessly integrate. When the oil comes into contact with your skin, your skin soaks it up quickly and readily, believing that this is its own sebum. When jojoba oil joins forces with your skin’s protective layer, moisture retention is immediately improved, as is the strength and suppleness of your skin.

This is another plant oil that’s full of antioxidants, which are great for targeting the visible signs of aging.

If you’ve got oily skin, then listen up…

Some of the oils on this list won’t be suitable for you, as they could clog up your pores and lead to breakouts. However, jojoba oil is completely different…

Jojoba oil isn’t actually an oil. Technically, it’s a wax ester, rather than a triglyceride.

What does this mean?

It means that jojoba oil isn’t very greasy, and is also pretty lightweight in nature. This makes it non-comedogenic, which means that it won’t clog up your pores and contribute to breakouts.

In fact, jojoba oil can have the opposite effect…

Since the oil so closely resembles sebum, the skin is often tricked into thinking that jojoba oil is sebum that it has produced itself. This then causes your skin to cut back on its own sebum production, resulting in skin that naturally becomes less oily over time. 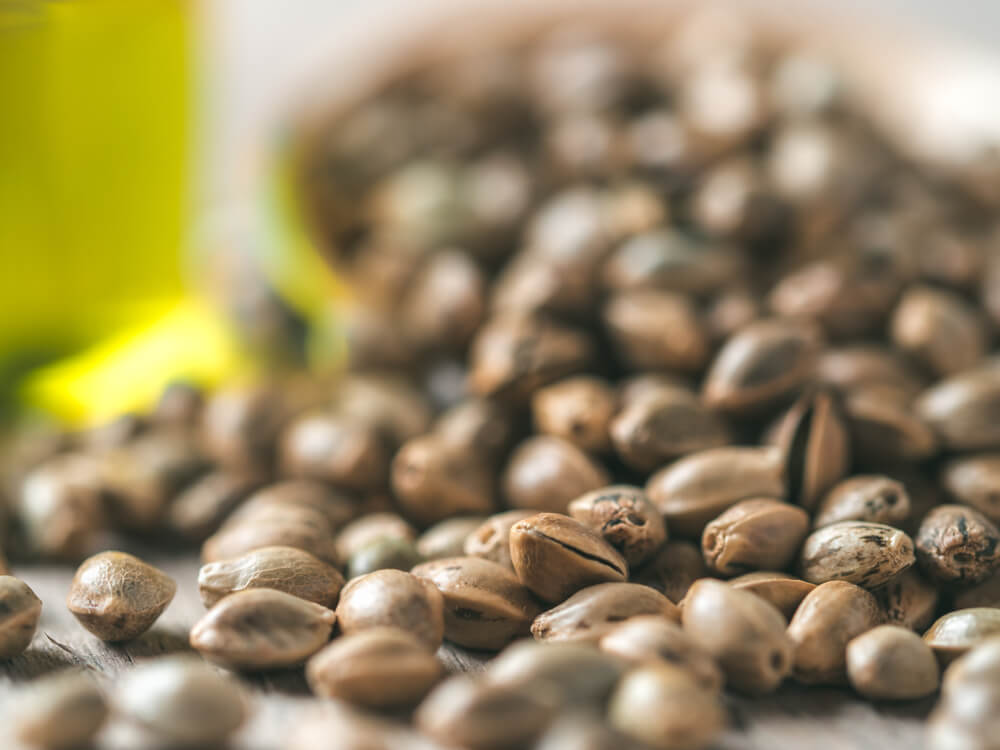 Hemp seed oil is often confused with CBD oil, but the two are very different. Unlike CBD oil, hemp seed oil doesn’t contain any THC. Rather than being used for medicinal purposes, it is revered for its nutritional profile, making it a popular ingredient both in the kitchen and on the skin.

As mentioned earlier, fatty acids are key when it comes to keeping your skin moisturized and hydrated in the long-term. There are several plant oils, along with other ingredients, out there that can nourish your skin with essential fatty acids, but hemp seed oil is the only one that contains these ingredients in the right ratio.

The balanced amounts of omega-3’s, omega-6’s, and omega-9’s within hemp seed oil not only moisturize the skin, but also stimulate skin cell regeneration and growth. These are natural processes that slow down with age, which is why boosting them back up can make such a radical difference. Newer and fresher skin cells that have stronger moisture retention capabilities are exactly what you need when trying to turn back the clock on your complexion.

Those same essential fatty acids are also key when it comes to reversing the visible signs of aging. They will help to firm and tighten your skin, ensuring that your skin is naturally producing all of the proteins and other components it needs to look youthful.

This is another oil that’s completely non-comedogenic – even if you suffer from severe acne, hemp seed oil won’t make it worse. In fact, it could actually help – its gamma-linolenic acid content can significantly reduce inflammation. It also regulates the skin’s natural oil production – if you’re producing too much, it will slow this down, while those who aren’t producing enough will start to notice an increase in sebum.

One easy way to incorporate hemp seed oil into your skin care routine is by treating yourself to the OROGOLD Cannabis Golden Leaf Collection. All three products contain hemp seed oil, along with a number of other potent botanical extracts.

You can also double up on the benefits that hemp seed oil gives your skin by adding this ingredient to your diet too. You can use the oil itself, or you can snack on hemp seeds. Whether eaten roasted or raw, hemp seeds are a delicious ingredient that have been consumed by humans for centuries. 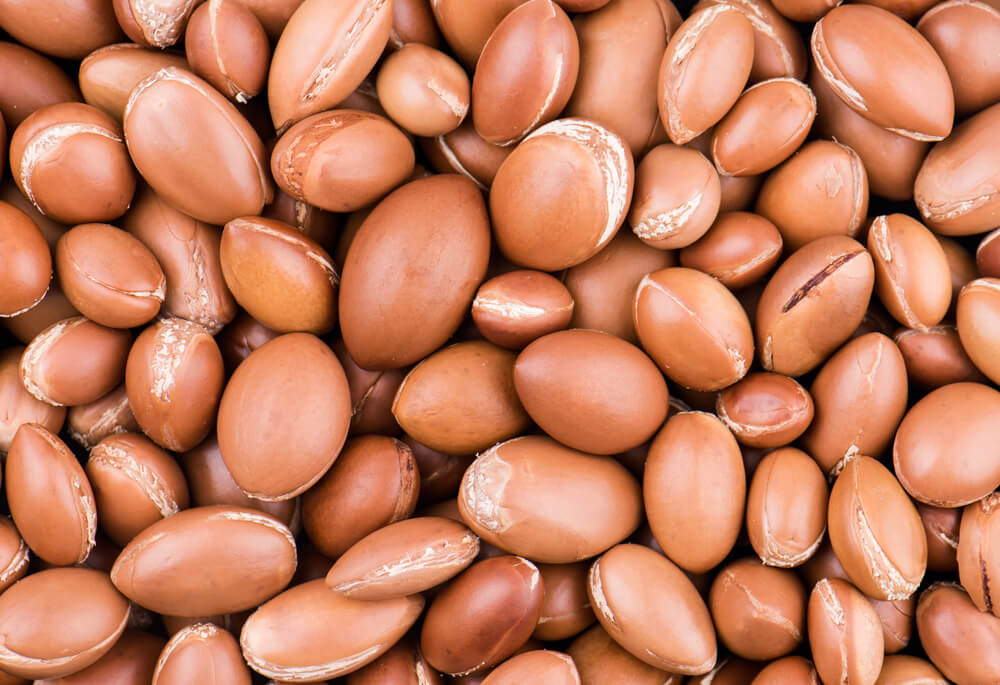 When it comes to hair care, argan oil has really made a name for itself. You would be hard pressed to look at a shelf of shampoos, conditioners, and other hair care products without having seeing the oil mentioned several times.

While some ingredient trends are nothing but pointless fads, the argan oil craze really does have some substance behind it…

One of the reasons why argan oil is such a popular hair care ingredient is because it is highly moisturizing. This applies when the oil is used in the skin too – it all comes down to the oil’s high vitamin E content, which enables the skin and hair to increase how much water it can hold onto.

Argan oil has also been proven to improve elasticity in the skin, which is key if you are seeking a tighter appearance. These effects are even greater if argan oil is used both topically and consumed orally.

Many don’t realize that this oil is actually an amazing culinary ingredient. Since it comes from the argan nut, it has a beautiful nutty flavor that can be used in several different ways in the kitchen.

This is another oil that those with oily skin will love…

Argan oil has anti-sebum effects, meaning that it reduces the amount of sebum your skin naturally produces. One study found that the oil was able to significantly reduce the amount of sebum produced by the skin when used consistently for just four weeks, making it no surprise that argan oil is rated as a “0” on the comedogenic scale.

Thanks to its soothing, healing, and anti-inflammatory properties, argan oil can also help with a wide range of skin issues, from acne to rosacea. Again, its anti-inflammatory effects are doubled when argan oil is taken orally as well as used topically.

There are so many different plant oils out there that are used in skin care, making it difficult to determine which ones your skin actually needs. If your main aim is to tighten and rehydrate your skin, then these six oils won’t disappoint. Use them individually for noticeable improvements, or combine them together for a complexion that positively glows!